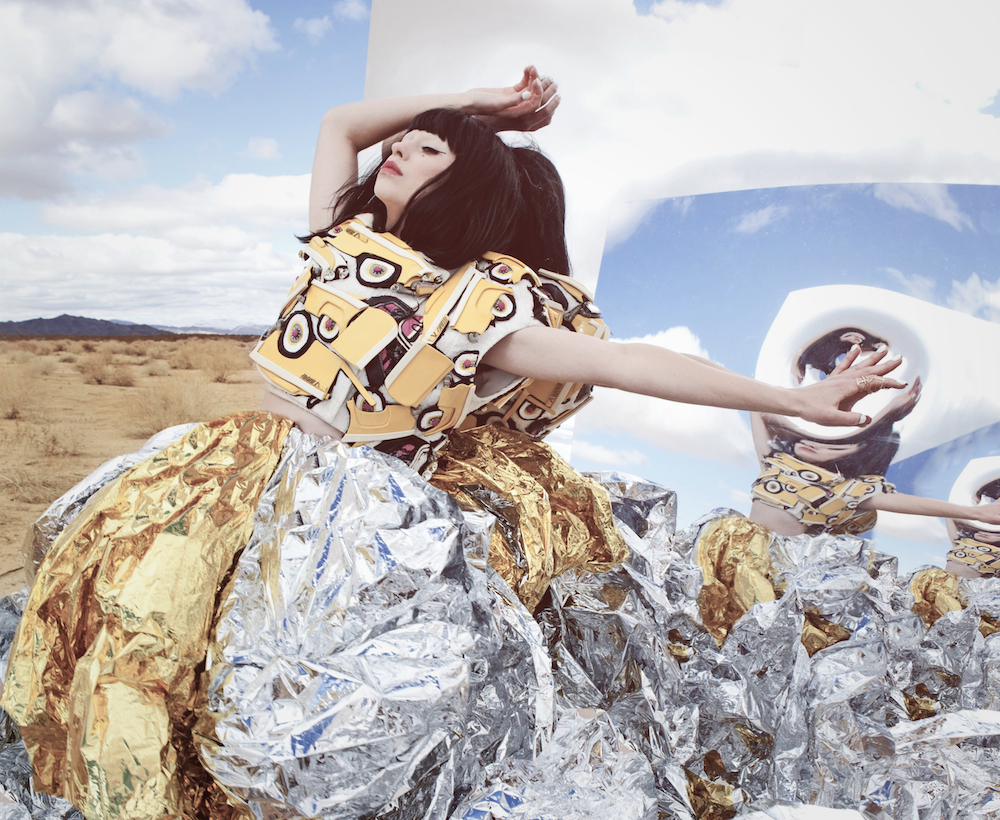 Those lucky enough to know the name Kimbra outside of her Gotye collaboration “Somebody That I Used To Know,” are likely aware of how intricate of an artist she actually is. And those who have seen her live performance know how much of a punch her vocal “fist” can pack.

The 24-year-old New Zealander has such a powerful voice and displays it in so many ways that it would be a shame to tie her down to any one song or pop culture reference. And in her own way, she's reminding fans of that with the release of her second album, The Golden Echo.

“Of course, my hope is that people might see me as an artist that goes beyond the Gotye song,” she admits. “But at the same time, I try not to spend too much time thinking about that because I can’t control it. All I can control is the art I make and the records I put out. The way people perceive it or the comparisons they make, that’s part of being an artist—putting your work out in the world for people to make their own evaluations about it. Some will dig it and some won't.”

She admits the two have since played music together but have no plans to release anything in an attempt to duplicate their success.

“We hung out when I was working on my album, just because we’re friends and it’s a language we speak together,” she says. “But in terms of trying to recreate another epic collaboration, I don’t think it would be of interest to either of us, because we’re quite aware you can’t repeat moments again. It happened, it was a beautiful space in time. And I believe you keep pushing on to the next phase. If we were to work together again musically, it would be out of a desire just to do something different.”

And while “Somebody That I Used To Know” was responsible for her radio success and GRAMMY Award winnings, she counts it as one of many layers in her career so far.

Once the dust settled, Kimbra and Gotye went back to their respective lives. He ventured back to his home and studio located in rural Australia. She quickly began work on The Golden Echo, writing with the same voice she had before their coupled rise.

“[Success] doesn’t change the place that we create from,” she states. “We’re still making music for the same reasons. We’re still running to the things that excite us rather than meeting others’ expectations or what they might ask of you. It’s about the choices you make. When you move to a place like Los Angeles, you can choose to live in Hollywood with all the pressure of that world. But you don’t have to.”

Hollywood would seem like the natural next step for someone in Kimbra's position, but she's taken a very different route. She made herself at home on a farm in Southern California, complete with roaming animals. This is where she found the inspiration for what would become her latest album.

“[Writing] was a different experience from the glamorous city elements...I started the record process in my bedroom, much like Vows. The spirit was the same—embracing the things that excite me and the desire for experimentation,” she states.

“The purist place you can write from is when you’re cut off from any loud opinions, and you can ground yourself in the things that made you write music in the first place. For me, it comes from nature and being by myself, because it makes me ask questions. I start to listen more to the world around me and get in touch with things that might be commonplace or mundane to the naked eye, but when you spend time with them, they reveal themselves in new ways.

“That’s kind of what The Golden Echo explores, the idea of engaging deeper with something. You have to be listening carefully sometimes to hear the echo. And the inspiration itself came from a flower, the Narcissus Golden Echo, which is a very ordinary flower but it opened me up to a wealth of wisdom.”

As the songstress embarks on this new phase of life and her career, she feels indebted to her fans to follow her true passion while writing. And she says she’s proud to share a body of work that came from a place of authenticity, not a place of pressure and expectation.

“One thing I’m very proud about from the last album is that, at least overseas, we had about six singles off it and I made videos for as many songs. So it feels like a whole body of work. And that’s my goal with this new album,” she admits. “At the same time, I can’t predict anything. Anyone who claims they have all this figured out, they’re just guessing. I just know what my instincts are and that’s good enough for me.”

The Golden Echo is definitely a body of work with each track having it's own definition and style. The album truly reflects the artist, being packed full of diversity and power without too much force. It becomes very clear she draws inspiration from numerous styles of music to create her own twist of pop without limitations.

“I really think pop music can be a place where people use their minds when they listen to it,” she explains. “They can unpack it for themselves and decipher symbolism and live inside a song. It can be three-dimensional. I truly believe that.”

And as far as airplay goes this time around, she isn't looking to base her career on radio alone, considering herself more of an “old-fashioned” artist in that sense.

“The thing about [radio] is, it can do a lot for an artist, but it’s not really the place I’ve come from with my music because I’ve always grown my fan base with touring. Of course, the Gotye song changed that a bit, but I want to be an artist that lives by my albums.”

Ultimately, Kimbra hopes that her albums find a home with her fans, and that they are able to dive into the record and live their lives with it.

“Records can soundtrack your life and highlight key moments,” she suggests. “As an artist, that’s such a great gift to be able to give someone.”