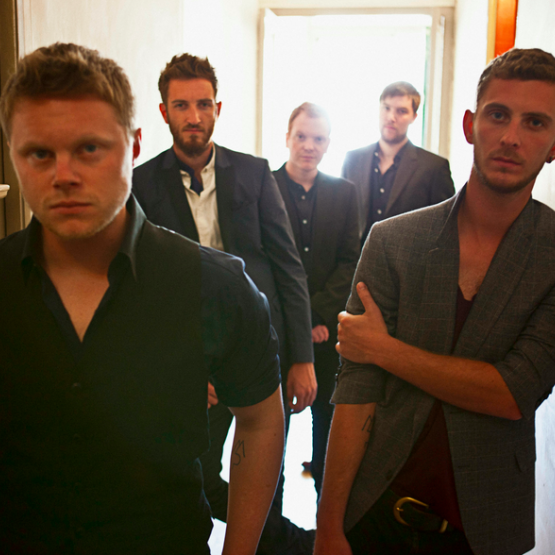 Morning Parade, the 90s dance-infused rock band from Essex, England, has been garnering much attention lately as the band prepares for its upcoming U.S. debut with the self-titled album releasing June 19. Following a successful six-show stint at this year’s SXSW, the group is now on tour with indie rockers Walk the Moon, a band that only recently opened for Young the Giant.

“We’ve been so lucky,” says frontman Steve Sparrow before taking the stage at Cain’s Ballroom in Tulsa, Okla. “It’s still unbelievable. We go from our normal lives and our everyday jobs to this sort of Hollywood experience. It’s like mindf--- sometimes.”
While being somewhat new to the spotlight can have its downside, Sparrow and the band seem to be handling it well, trying to glean from others and learn as much as possible along the way.
“At first when you’re new and 'green' it can be different,” he admits. “One of the first people I met was Kylie Minogue. We were at a party and there were about 70 people. A month before I had been working on a construction site and just paying bills and putting gas in the van, and then I’m meeting Kylie Minogue. After a while you start to realize that they’re just bands, they’re just people, and they all started out in the same place. They all started out doing something they love, and some people are more fortunate than others, and they’ve had greater success, but we all share the common interest in that we love music.”
While some of the best advice the band has received has come from other musicians they have performed with (such as Coldplay, The Kooks and 30 Seconds to Mars), Sparrow, who plays piano and guitar in addition to supplying lead vocals, says they take everything with a grain of salt. He also has his own advice: “Some bands think the music industry is just a game, and success is about how well you play the game. To some extent I agree but I don’t really believe that. I believe it’s about making great songs and having a great team. The harder you work, the luckier you get. Just keep working. Bands come and go--fad bands come and go--but bands will with real songs, they can impact people’s lives.”
The band’s fan base continues to grow as they criss-cross the country with the guys of Walk the Moon, which is based out of Cincinnati, Ohio. Performing their hit songs such as “Us and Ourselves” and “Under the Stars,” along with the lead single in the U.S., “Headlights,” Morning Parade knows how to fill a venue with energy and excitement stemming from their layer-driven anthems, proving to be as much artists as entertainers.
While the album may have released in the U.K. in March, it has been delayed in the U.S., something Sparrow wasn’t too thrilled about at first. In hindsight, it may be have been a blessing in disguise, as the singer admits. "I think a lot of the time it’s about where you can be. If you’re releasing an album, you need to be there, touring and promoting it as a band. It doesn’t make much sense for a band that’s trying to grow its fan base to release an album and not be able to go out and promote their own album. We spent a lot of the last two years touring in Europe, and it shows. We sell so many more tickets in Europe than we do in the U.K. That’s where we spent our time physically."
Now that the band is physically in the U.S., the stage is set for similar success in North America. Morning Parade puts on a brilliant live show, something that will prove valuable as the band continues to promote the new release.
"American audiences have been really good to us," says Sparrow. "And despite their theatrical warmups, [Walk the Moon] has been great to us, too. They're a lot of fun. We're excited to be in the States."
His one complaint about the U.S.? "There's Taco Bell and Burger King along every interstate, but what about vegetables?"
Welcome to America.
For more information on Morning Parade, go to the band's website. The self-titled debut album releases June 19 in the U.S. and Canada, and it will be available physically and digitally.
Watch the video for the band's lead single, "Headlights."
Add comment
JComments