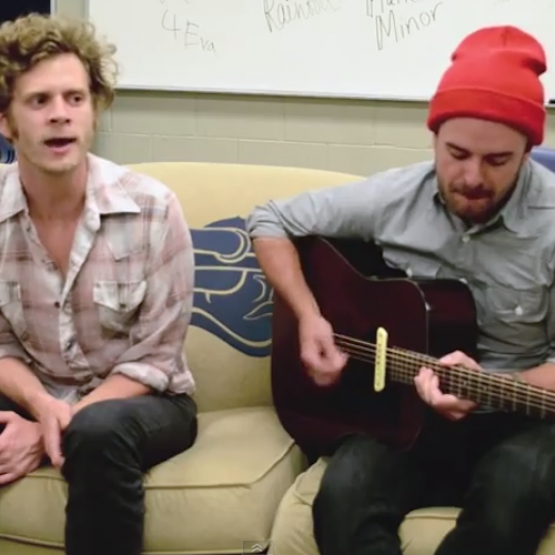 We recently sat down with Matt Thiessen and Matt Hoopes, founding members of Relient K, to discuss the album they are currently recording, as well as their other current projects. PLUS: Watch an exclusive video of Thiessen and Hoopes performing "Forget and Not Slow Down" below.

Variance Magazine: How is the writing panning out for you guys right now?

Thiessen: It's good. I think that we are just trying to be a little adventurous with this next record, and not necessarily in an experimental way, but just doing something different for us. We are just trying to figure out what we can do that people won't necessarily expect and how to do it without alienating everyone that might already like what we do now. So that is the crux of it. In our opinion, we aren't really worried. If we do what we feel right now and then if it doesn't work, then we will do another record. It's our seventh one, so we can't try and repeat the fourth, the fifth or the sixth and recycle our material. We are just trying to do something fresh.

Hoopes: I think that has been the most exciting thing because it does feel like starting over in some ways. In the same ways that it is kind of challenging, it also makes it exciting to play music on this basic level. I told Matt that working on some of these new songs is giving me this feeling that I haven't had since we were in high school together, writing new songs. It's fun, and it's fun to push the boundaries of what we are comfortable with--not just do whatever comes easiest.

VM: I'm excited to hear then new stuff. Something that I have always admired about you guys is that you make significant changes from record to record. So would you say that the new songs are more than the "normal" Relient K change?

Thiessen: Yeah, that's the thing. How do people even interpret songs these day? It used to be, "this band is in this genre," but now I think it is more like, "how good is the melody? How good are the lyrics and do I like it, or do I not?" These songs have catchy melodies and decent lyrics hopefully, so we are just going to mess around with the rest of it and see what happens.

VM: I know that it is difficult to put labels on music these days, but what direction do you feel these new songs are leaning towards?

Thiessen: Just pop I guess? We are trying to be more "urban," if we can be?

Hoopes: …Yeah if anything.

VM: What kind of projects do you guys have going on, other than focusing on writing and recording the new album? Mono vs. Stereo?

Hoopes: Yeah, we've got the label thing that we are doing and just focusing on Deas Vail. At least for the time being, Relient K will be on the label. We really like working with those guys, and it has been a fun thing to try and do. As frustrating as it can get sometimes, trying to be a record label in a time when record labels don't really make sense as a business model. I am really excited about Deas Vail. I think that they have a great record and they are very talented. They are just about to start up some touring for the new record, and I am excited to see what they can do with it.

VM: Are you guys actively looking for artists for Mono vs. Stereo?

Hoopes: Not incredibly. Right now, we are just trying to do everything that we can for Deas Vail, Relient K and Farewell Flight.

Thiessen: Until people start physically supporting those bands, and making it to where on paper they are selling records and stuff, it doesn't make sense for a label to pick up any more.

Hoopes: Unless the right thing comes along. There was a band called Mike Mains and the Branches that we felt very strong about. He was a great friend and singer, but it ended up not working out on the business side of things. Something like that would have to come along, where I feel like we could go out and sell half-a-million records. That kind of thinking. We aren't going to go out and sign ten bands and try to break all their careers. We just want to do the best job for the bands that we have right now. Working with a limited roster and limited budget, we are trying to be smart about it and get those boys on tour.

VM: What are you up to, Thiessen?

Thiessen: I've been working with Owl City a little bit more. He is about to put out a new record…

VM: Do you feel like the projects are bleeding together?

Thiessen: I mean, I feel like Owl City and Relient K naturally have an overlap as far as melodies and stuff. I found myself becoming an Owl City fan, after I met him (Adam) and then I don't know if that affected the way that I write. Sometimes I will write something and I'm like “that sounds like something Adam would write!" But yeah, it is weird that everyday a new song comes up and it's like "what do you do with it? Where do you put it?"

VM: Who was the girl that you were working with from The Voice?

Thiessen: Oh, that happened and she didn't cut the song--Dia Framptom. It was a good song, and she wrote most of the song and lyrics. She did a great job, so I was a little bit bummed that she didn't cut it.

VM: Perfect day, driving in your car with the windows down--what are you listening to?

Hoopes: I don't know what my "classic" one is, but the only thing that I want to listen to right now is this band called Now,Now. It is like the first time in a long time that I want to listen to every song on a record, over and over again. It has a cool energy, a great female singer and a lot of "Death Cab-isms" to it. And [their album] is really well-written.

Watch Relient K "Forget and Not Slow Down" here.