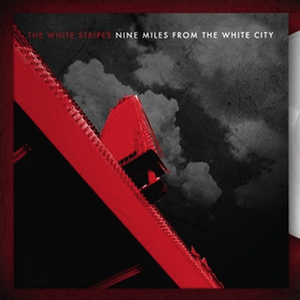 In celebration of the ten-year anniversary of the White Stripes's Elephant, Jack White's Third Man Records is digging into its "Vault" to release a new live album titled Nine Miles From the White City. The double LP, recorded at Chicago's Aragon Ballroom in 2003, features 26 tracks and will be accompanied by Elephant demo tracks "I Want to Be the Boy to Warm Your Mother's Heart" and "Little Acorns."

The set will also include a 56-page photo book of the Elephant recording sessions, only three of which have been previously published. The LP of the live album will each be pressed on vinyl, one on red and one on white. The 7" of demo tracks will be pressed on "opaque red vinyl with black whisps," according to a press release from Third Man.

The tracklist is below, followed by brief clips from the set. Join the Third Man Vault for access to Nine Miles and more information.

-When I Hear My Name
-Dead Leaves and the Dirty Ground
-Love Sick (Bob Dylan)
-Hotel Yorba
-Aluminum
-Cool Drink of Water Blues (Tommy Johnson)
-The Hardest Button to Button
-I Want to Be the Boy to Warm Your Mother's Heart
-Stones in My Passway (Robert Johnson)
-Stop Breakin' Down (Robert Johnson)
-Do
-In the Cold, Cold Night
-Seven Nation Army
-The Same Boy You've Always Known
-Black Jack Davey (traditional)
-We Are Going to Be Friends
-Offend in Every Way
-Little Cream Soda
-Cannon/Party of Special Things to Do (Captain Beefheart)
-Candy Cane Children
-The Air Near My Fingers
-Screwdriver (tease)
-Ball and Biscuit
-Screwdriver (reprise)
-Let's Build a Home
-Goin' Back to Memphis (Henry & June)