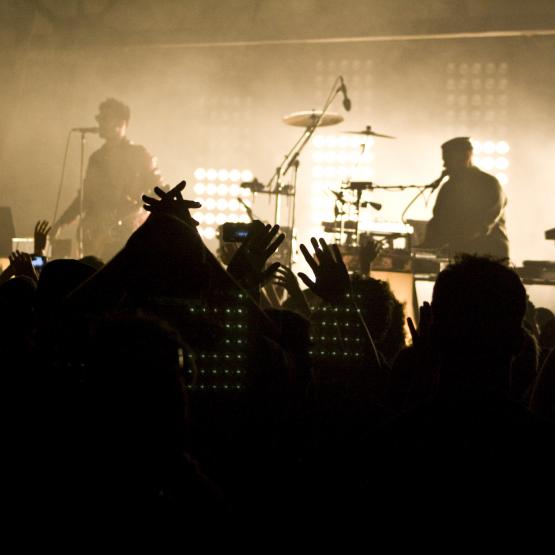 When I stepped into the venue, I anticipated two things; half dressed girls and glow stick headbands. Little did I know that Chromeo would bring such a diverse crowd to their live show. The fans consisted of chic rich kids, ironic hipsters, grungy burn-outs, “normal” people, and middle aged parents who dragged their kids along for the ride because, well, this is their modern day version of The Cars.

I wasn’t sure whether to fear for my life or be extremely impressed when the crowd started chanting in unison, “Chrome-ee-oh, Ooooh-Oh!” And when the electro-pop music gods took the stage, the energy seemed to creep over the barricades and sink into the souls of the two front men. Ladies drooled over the vocals and presence of Dave 1 just long enough to lose their minds to the sound of the synthesizing, talk boxing, keyboardist, P-Thugg. Naturally, they played all the hits that made the majority of the crowd lose 10 lbs. of sweat. It was a good night for both old fans and new, pulling songs from their 2004-2010 albums (She’s in Control, Fancy Footwork, and Business Casual.)

Chills run through your body any time Dave 1 sneaks away from the mic to unleash on the drums next to him. And for someone who is separated from the crowd by their own equipment, P-Thugg manages to hype up the audience better than most. Visually, they have achieved the “can’t-look-away” aspect of a live performance. If you’re in the crowd, you might catch a finger point of acknowledgement or a distant dance partner moment with one of the members. From the sidelines, you’ll be able to see the intimate madness of arms flailing and hair flipping.

I’m convinced that 70% of the people in that room had taken weeks of dance lessons before the show. Even the overly intoxicated man who was high-fiving everything in sight, including our photographer’s camera that luckily remained intact, had unexpected dance moves. I am also convinced that Chromeo might be the happiest duo on earth. The ability to remain connected to the crowd and keep a genuine smile through every song is unique. They seem to enjoy their show just as much as the music lovers staring up at them.

The dance party atmosphere was heightened by the flickering bulbs in the background, and confetti guns made you feel like it’s N.Y.E. at Times Square, with strips of shiny keepsakes raining down over the crowd. You can listen to the albums all day, but they won’t expose the relentless qualities that are hidden in Chromeo’s live performance.