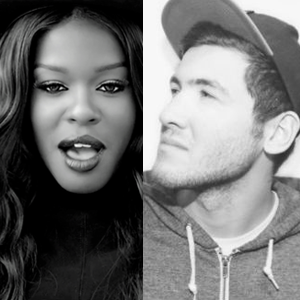 [Developing story — scroll down for updates]

Another weekend, another Azealia Banks Twitter quarrel. We've seen this movie before. The New York rapper posts something on Twitter, a fellow young musician takes note and somehow upsets Banks, she retaliates with out-of-control Twitter vomit, she retorts using gay slurs as insults, the Internet lashes out, Banks gets defensive and starts trying to justify her actions with confusing rhetoric. Like her previous "beefs," including her most recent round with Angel Haze and Perez Hilton, her spat this week with "Harlem Shake" producer Baauer—no matter its origin—reflects poorly on the young MC.

Banks on Thursday jumped on the viral "Harlem Shake" craze that is sweeping the Web and posted her own version of the track to Soundcloud. Shortly afterward, Baauer had the cut removed off the site—to which Banks asked, "why you coccblockin tho??? Lmaoooooo." Despite the fact that covers and remixes are certainly nothing out of the ordinary today, Baauer responded: "cause its not ur song lol." Banks predictably lost it at that point, ranting and hurling insults at the producer, calling him a "faggot" and a "pussy," and then suggesting that he and others on Twitter “grab each others dicks in a circle jerk” and that they should “drown in faggotry.”

While Baauer should arguably be a little more flexible with his breakout hit (especially given his roots borrowing from rap and hip-hop)—looking to any other recent YouTube hits (Gotye, PSY, etc.) for reference, he'll likely soon figure that out. In the meantime, Banks hasn't learned her lesson. The rapper—who has previously had beef with Nicki Minaj, Lil Kim, Iggy, T.I and Munchi—immediately defended her response, claiming those who disagreed with her were old-fashioned and overreacting to the use of the f-word.

"Here we go again," she tweeted. "Everyone pretending to be so shocked and moved by the word faggot ... It's like society is so bored with itself it needs to hold on to these outdated rules of what you can say and cannot say."

While she has a point in that we do tend to obsess over political correctness and overreact with faux "outrage" over every little thing, Banks is quickly becoming that one person you follow on Twitter—the one who constantly sub-tweets and cranks out cryptic messages, then gets offended when someone points out their unnecessary or misdirected snark. (Hey, we've all sub-tweeted!) But, here's the thing: When this person is just someone you casually follow on Twitter and not someone you know very well, this stuff quickly becomes overwhelming, and you might just lose interest in this superficial connection—and perhaps unfollow.

I am a fan of Azealia Banks. Over the last year, in particular, she has shown much promise, introducing a vibrant brand of hip-hop that is uniquely hers. She's a fresh face in a music scene that needs female artists like her, with quick-spitting verses and dance savvy that demonstrate great versatility. Her music has had our attention, but there's not enough of it right now. Following a 4-song EP last year, she has long promised a full-length album that has yet to materialize. But the trickling of tracks has lately been overshadowed by Twitter drama.

Considering hip-hop's longstanding difficulty with homophobia, evidenced recently by hip-hop fans' immediate anti-gay quips directed at Frank Ocean following his altercation with Chris Brown (in which Brown reportedly attacked Ocean), the last thing we need is an up-and-comer stirring the pot with careless jargon—especially when our relationship with her as an audience is still so paper-thin.

Banks certainly has potential. She certainly has gobs of talent. But right now, her music has become a sideshow to the main event. And while she's drawing eyeballs on Twitter, she might be about two sub-tweets and a gay slur away from losing a lot of those casual "followers" (aka listeners) who really just wanted some good music. Sure, you never want to rush one's art—and I'm still rooting for her, but at some point, Azealia Banks needs to put up or shut up.

UPDATE (Feb. 16): Banks on Saturday sidestepped Baauer and released a video for her "Harlem Shake" version, stating: "Sick and tired of these raggedy male musicians and their scarred ego's trying to block my f------ light." See the clip here.

UPDATE (Feb. 18): After Banks stubbornly released her Soundcloud version of "Harlem Shake"—followed by her video on Vimeo, when Baauer had the Soundcloud version removed, it appears Baauer directly asked her beforehand not to release anything. In a new interview with the Daily Beast, he explains that he had planned to release a redux with Banks, but her verse wasn't that great.

"She laid something on 'Harlem Shake' and it was so-so. Didn't love it," he said. "And that was a little while ago, and since all this video stuff happened, our plans all changed. Because of that, we decided to just release the song on its own with no vocal version. So we told her, 'Please don't release your version.' And she said, 'Well, I'm going to put it online anyway.' And we said, 'Please don't. We'd really like it if you didn't.' And she did."

Baauer also revealed that he is working with Aluna Francis from AlunaGeorge and Just Blaze—and possibly A$AP Rocky—on his upcoming EP.

UPDATE (Feb. 18): Ms. Banks isn't going down without a fight. Following Baauer's interview response to the quarrel between them, she opted to provide visual evidence that the producer's recollection doesn't quite add up with the conversation she recalls. A copy of the email Baauer sent her on Christmas Eve (seen below) reveals nothing but praise for the young songstress; he even suggested that he would adjust the beat to make more room for her vocals. Following her disclosure of the email message, Banks tweeted, "Why lie?" So what happened? 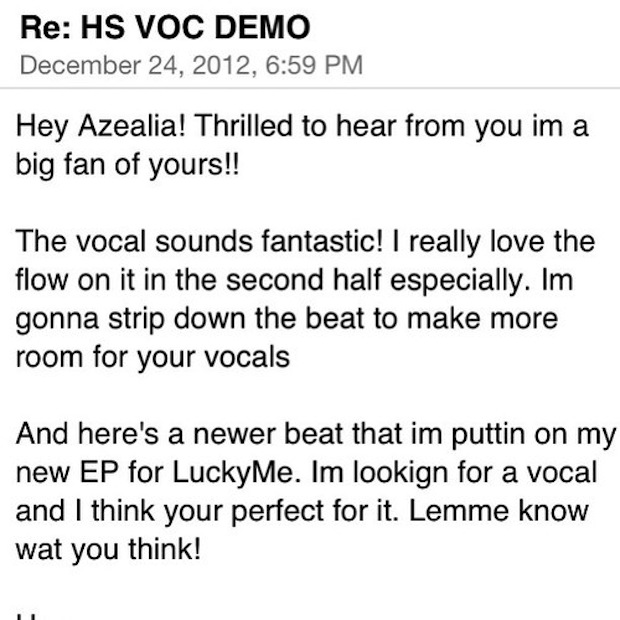 Perhaps, at this point, Baauer would be better off giving his blessing, allowing both artists to admit their own respective errors. Maybe?